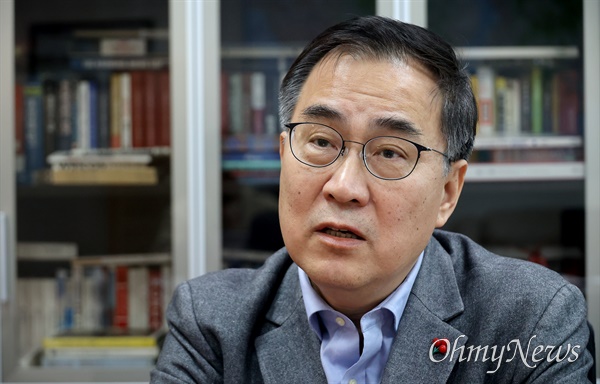 Choi Hyeong-doo, a member of the People’s Power, pointed out the evils of the current single election system. The intention is that the constituency in the metropolitan area, which is narrowly divided due to overpopulation, has made the role of the National Assembly member too peripheral. Members of the National Assembly neglect macroscopic agendas related to state affairs, and instead “encourage NIMBY” or “attach to local constituencies to manage hometown associations or bankbooks”.

He emphasized several times that the introduction of the central electoral district system is the best alternative. ‘Regionalism can be eased, as well as minority parties’ entry into the National Assembly’, ‘As each party has more members from different regions, the concentration of opinions among individual parties is reduced’, ‘Such changes will eventually lead to fierce confrontation between parties. He said, “If the difference between votes and seats decreases, citizens’ political utility will increase and extreme demonstrations and rallies will also decrease.”

That’s why he was ‘sincere’ in political reform. Since last year, he has been listed on the Special Committee on Political Reform of the National Assembly, and he is also studying hard by posting his name on the recently formed ‘Bipartisan Political Reform Members’ Meeting’. Rep. Choi sees this as the best time to reform the electoral system. This is because President Yoon Seok-yeol had good fortune at a New Year’s press conference with

“Single constituency system, make members of the National Assembly the representative of the alley that manages e-bankbooks”

– What do you think is the worst effect the current single-member constituency system has on the political culture of the Republic of Korea? Why should the electoral system be changed?

“The scary thing about the single-member constituency system is the so-called ‘tsunami’ phenomenon. Once swept away, it completely falls apart. In the last general election, that was maximized. The difference between the Democratic Party and the people’s power was 8.5%p. With a difference of p, the Democratic Party took 160 seats in the district, and the power of the people took 80. The metropolitan area is worse. The difference between the two parties in Seoul, Gyeonggi, and Incheon is about 11 to 13%p. But how many times was the difference in the number of seats? It is more than 5 times. Out of 121 seats, 1 seat is excluded from the Justice Party, and the ratio is 103 to 17. As a result, the gap has become wider in the case of the metropolitan area.

A sharp difference in seats (different from the vote rate) and a tilted (political) terrain lead to rallies. In the right-wing camp, isn’t it that they are not represented at all even though they voted so many times? So there will be more protests. The Democratic Party also suffers from pressure from strong supporters, saying, ‘Why don’t you do it when you absolutely have a seat?’ The conflict between the two extremes grows. Rather than neutralizing, combining, and developing extreme public opinion within the region where public opinion in Korea is concentrated, it has become a pattern of reinforcing each other in a more extreme state.”

– There may be several alternatives, but why do you think the ‘large constituency system’ is the best?

“Of course, the president made that proposal, but many people, including National Assembly Speaker Kim Jin-pyo and our political scientists, are proposing the central electoral district system as a realistic alternative. The most important thing is to reduce the gap between the vote rate and the actual number of seats. If it did, isn’t that what the people thought?

In the case of Ireland, the population is only 5 million, but it is a region where conflict and confrontation are concentrated. Northern Ireland and Ireland are divided, and conflict between Protestants and Catholics continues. So, the system that has been chosen here for a long time is the presidential election system. Since about 200 members of the National Assembly are elected, that means one representative is elected for every 25,000 people. As a result, about 125,000 people elect five people from one constituency. Thanks to that, Ireland has been able to operate a governance system for a long time.