As Hanwha Life Insurance fully introduced the next-generation computer system ‘insurance core’ on the 13th, some services were suspended, causing some customers to experience inconvenience in using the web and mobile devices.

Although there are aspects that are unavoidable for the initial stabilization of the computerized system, there are concerns that it may lead to greater inconvenience as service ‘stuck’ and ‘error’ have occurred whenever the next-generation system is introduced.

After two years and five months of business from April 2020, Hanwha Life Insurance is operating the next-generation computerized system insurance core in earnest on the 13th.

The accounting system was completely changed with the new International Accounting Standard (IFRS17), which will be introduced next year, and the new solvency system (K-ICS) that will be implemented in conjunction with it, so there was a need to upgrade the computer system.

Hanwha Life Insurance replaced the entire system for the first time in about 10 years and was equipped with the latest technologies such as cloud and artificial intelligence (AI). In particular, the ‘hybrid cloud’ method was introduced by entrusting the cloud sector, which is the core of the next-generation system, to NAVER Cloud.

Hanwha Systems, a subsidiary of the same Hanwha Group, took charge of this business service. It is a large-scale project with a contract value of about 100.7 billion won. It was originally planned to be introduced in the first half of this year, but was postponed to the second half due to the spread of COVID-19.

The problem is that at the beginning of the introduction of this next-generation system, a period of stabilization is required for a considerable period of time. From the 13th to the afternoon of the 19th, Hanwha Life suspended insurance contract loans and repayments to stabilize the system.

Usually, when stopping the service for system inspection, weekends or holidays are used, but this large-scale computer system replacement is trying to stabilize, eating up time on weekdays, not knowing when and where an error may occur.

For insurance contract loans and repayments, the original service suspension schedule was until the 16th, but it was extended to the 19th because more time was needed.

Fortunately, it is said that there have been no financial accidents due to system errors so far, but the impact of the introduction of the new system is already taking place as insurance contract loans, which are often sought by customers, are only made through call centers.

In addition, consumers and the industry view the introduction process of the next-generation system with mixed eyes because other large insurers have a ‘painful experience’ when they introduce a new system.

In 2017, after Samsung Life introduced ‘SAP-ERP’ through Samsung SDS, it caused inconvenience to consumers, such as not being able to pay insurance money due to a system error. In some cases, insurance premiums were overcharged and returned.

Kyobo Life, which was originally scheduled to open at the end of 2018 to September 2019, was delayed by about 10 months to prevent errors in the ‘V3’ developed by LG CNS.

An official from Hanwha Life Insurance said, “In the case of insurance contract loans, we have taken measures to use the call center customer center, and the rest are operating normally. 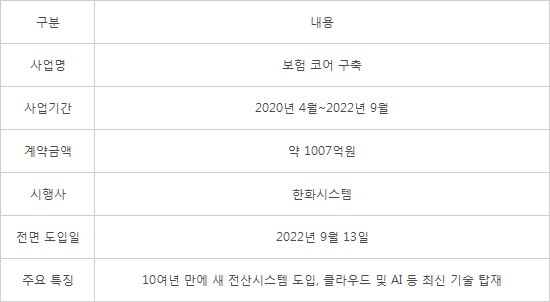